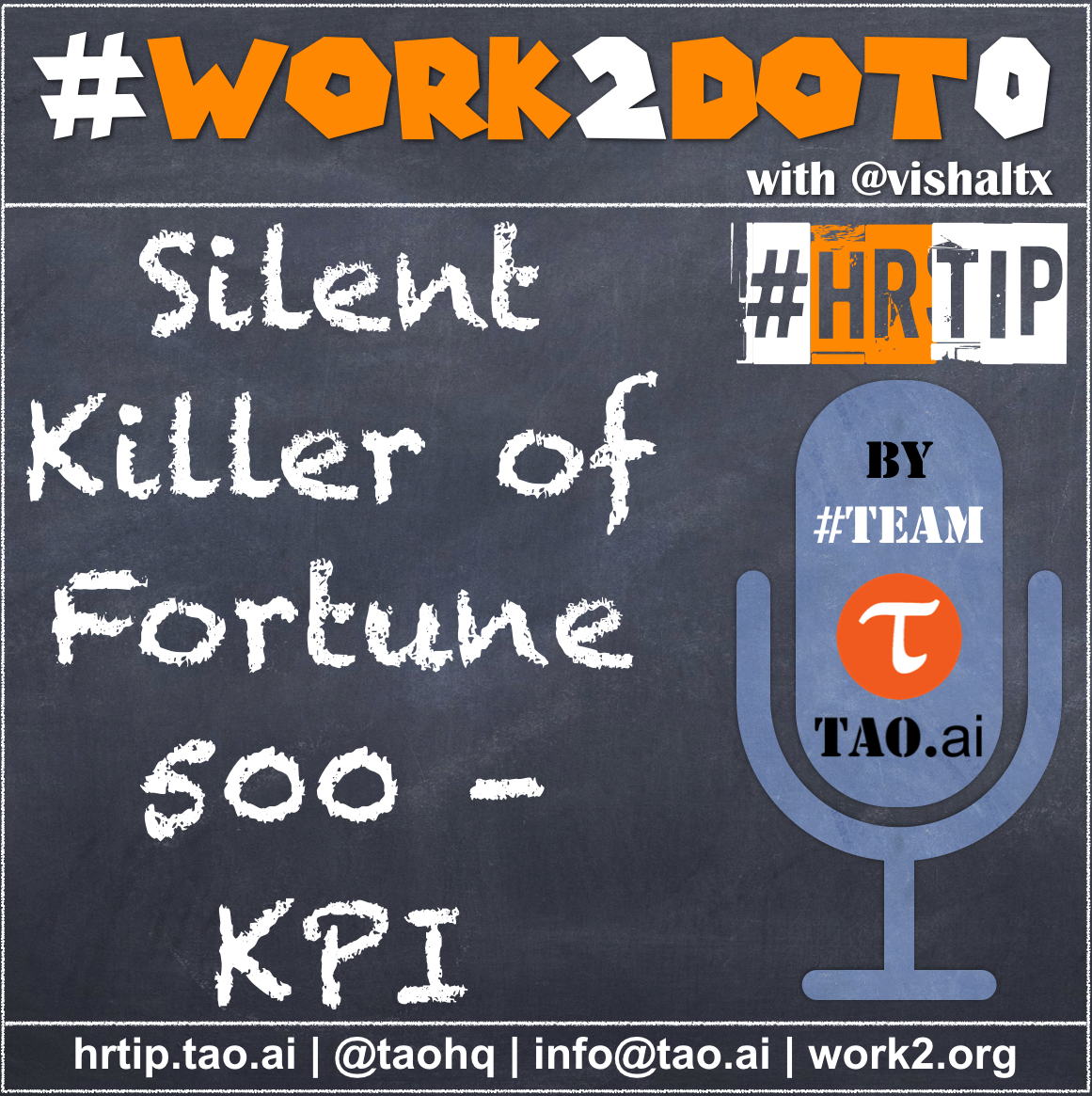 Let’s talk about the silent killer to fortune 500 companies. But before that, I welcome you all who HR Tip episode. In HR Tip, we share insights that we have captured by working with HR leaders, future of work practitioners, authors. And we are sharing those insights and bringing it right to you, so we can create a more open dialogue and conversations around how the future of work is evolving and, and what an HR should do to ensure that their organizations are always relevant and at the center of this evolution.

So, thank you so much for checking us out. If you find the content useful, I do appreciate if you subscribe and let your colleagues, colleagues know. And I do appreciate the comments so we can add it to the conversation and make it broader for all of us to converse and act on.

So, it was centered around how they’re struggling to get to the KPI. And, I was telling the gentleman about the story about a company called blackberry. And I met one of the product heads. And he said “Vishal we are meeting all of our KPI’s. We are hitting our numbers, right. Then why the company failed?” Right? And we all know the market changed the whole thing, right?

We know about blackberry, we know about Circuit T, we know about blockbuster. All of them have the same story. They were trying to do the same thing. Their KPIs were hitting numbers. Some of the KPI’s are failing, but most of them are hitting their numbers then why they failed? So, one of the very critical things that this insight brought up is, and which needs its own attention, or its own conversation was that maybe KPI needs to be revisited.

So, if you look at, if you look at the history of, from where the KPI has emerged during the past when Frederick Winston Taylor or Henry Ford, we’re redefining how we conduct business, redefining the modern management theories. There was a huge outcry on improving productivity. So there was a huge crowd cry on understanding the process, creating these process maps.

And that has sparked an enormous confusion. So, what happened? And why are you seeing so much mention of KPIs, even in fortune 500 companies? It’s no surprise. So, if you look at the evolution of a company; You are a start-up. in start-up, you’re figuring your thing out, you’re just trying to figure out the product market fit is going through.

And then you grow into a midsize. So, product market fit is fine. Now you’re trying to figure out the scale. Now you’re trying to figure it out; how much you spend and how much you get back and that math still holds. And that math holds a large-cap company and at that point, you’re don’t have to keep expanding that equation. You have to diversify.

So, during that mid-stage, all you want to do is more of the same thing and expect more outcome, right? So, you want to make sure that whatever I’m doing, I’m doing it at a cheaper price and I’m getting more out of it. That’s a perfect storm for KPI. That’s the perfect area where KPI would succeed. It would show its color. People start building trust on those KPIs.

But the moment you grow big, it’s already in your culture. The idea of KPI is already in the culture and it’s very difficult to take it out. But when you are grown, you are dealing at a commodity level. And you start relying on KPI’s so much that many times, KPI kills innovation. because it is emphasizing on activity and not too much on the objective.

It’s a soulless metric. So, you need to redefine, re-understand the KPIs or at least reevaluate the idea of KPI when you are a large gap organization. Because at your level you are looking to expand into other verticals. So sure, you can argue that if I’m a large-cap company, within my companies, I have a mid-cap, focus areas where a KPI would be fit. Absolutely, yes. Right? No doubt about it.

But many times, the core products that are generating you enough revenue for you to stay afloat, those are so very commoditized that your company itself has commoditized when you grow into this level. That’s the whole point. So, that is extremely critical, to understand that the KPI, it is a metric to understand the activity and keep a track on the activity.

But at a certain level, when you’re a start-up or when you’re a large cap, you have to focus on the innovative areas where you can explain the premium. And those innovative areas respect the idea of getting there but it doesn’t really talk about how to get there. So, there should be more emphasis on the objectivity of what do you want to achieve and the key metric that you have to help you understand and keep hopping to the activity. How you get there should not be or should be of limited attention.

So, keep that in mind. That it’ extremely critical because when you a large cap and we deal with a lot of large-cap organizations. When we’re dealing with or when we’re talking about these individuals.

It is to no one’s surprise that they’re also heavily relying on KPIs. And many times, even, it’s funny, if you want to have a chuckle go to and talk to your innovation company and talk about their KPI’s. I believe you would die with laughter that how you can put, and as noble an idea as innovation with the activity metric. That “okay, I should now be waiting 10 times or 10%.”

It is funny. It’s hilarious. And that is all because we are so much relying on KPI’s and these companies acquire, the large-cap acquires, they are from mid-size where KPIs worked. It’s not their fault. They have seen it in action. And sometimes, even your organization used to be a mid-cap. So that’s all surprised that there’s credibility there. So, keep a very vigilant eye on these funny creatures called KPI and see what’s the best metric.